The REIT time to invest?

The real estate market has been a key driving force in the Middle East and in the wider GCC and has attracted substantial foreign investment into the region over the years.

However, as we all know, much has been said about the demand-supply mismatch in the sector which has caused a general downward pressure in the real estate sector market. Inevitably, a change in investor sentiment creates the demand for innovative ways of diversifying portfolios. The risk-reward spectrum of investors can be better managed if the investment products available in the market can help to create liquidity and diversification to generate capital growth as well as dividend yields.

"REITs provide a liquid investment vehicle to tap into the attractive returns of the Real Estate markets in different geographies. Retail and institutional investors are realising the importance of this growing asset class in the MENA region. Equitativa, manager of Emirates REIT, the largest sharia compliant REIT in the world worth a $1bn, is seizing this opportunity by creating and managing several sector specific REITs, including our $400m Residential REIT, a hospitality REIT, a logistics REIT and other geographically specific REITs, offering investors a wide variety of exposure to diversified real estate assets." 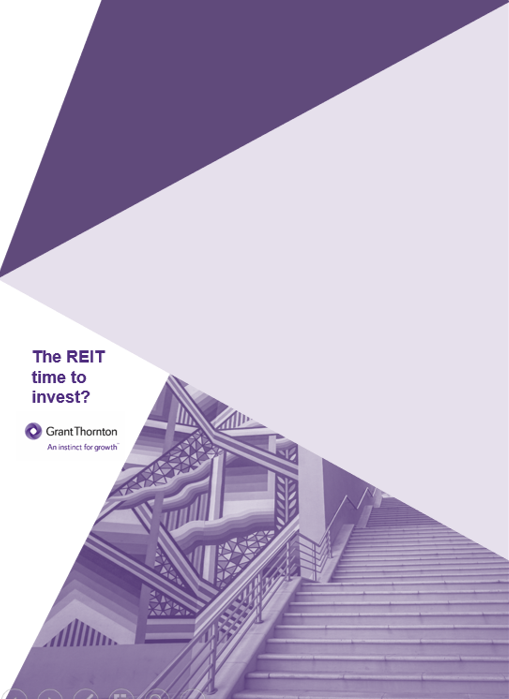 REITs, which are a subset of property funds, have been a rapidly growing asset class worldwide and signs of this growth have more recently also been seen in the GCC, enabling access to the region’s vibrant property market to people across the world.

It is interesting to see what level of growth REITs have experienced globally. The chart below depicts the REITs performance across a few selected regions and countries. REITs have been around for a long time now in developed markets such as the US and Europe. They are now having a growing influence in Asia Pacific and the Middle East. The global REIT market capitalisation reached a staggering USD 1.54 trillion as at 31 December 2018, with 37 countries around the world now offering REITs as an investment vehicle, and many more on the cusp of introducing new regulations to join the bandwagon. REITs have been recognized around the world as investor friendly and tax efficient vehicles for investors seeking to leverage returns from the real estate market.

Over the last decade, based on the chart below, FTSE EPRA Nareit Global REITs and the S&P global REITs indices have grown at a CAGR of 17.2% and 12.6% respectively, with the US REITs market experiencing a healthy 17.9% CAGR, Europe with 4.6% and UK 9.8%. Unsurprisingly, the Middle East and Africa REITs index only experienced a modest CAGR of 2.7% reflecting the fact that the market has significant capacity to develop to reach the growth levels experienced in the relatively mature markets. This, however, is also an indication that with the right investment infrastructure in this space, investors can potentially benefit significantly in the years to come.

REITs IPOs and their global influence

Over the past five years, there have  been 171 IPOs by REITs globally. The United States and Canada have, by far, been the most successful countries for new REITs with a 39% share of total REIT IPOs. In the United States, since their creation in as early as 1960, REITs have grown not just in numbers but also in size, impact and market acceptance and now operate across different sectors in the market.

As at 31 December 2018, public REITs in the US had a market capitalisation of USD 723 billion. Japan, Hong Kong and China  made up the largest markets by market  capitalisation after the US with values of USD 159 billion, USD 111 billion and USD 95 billion respectively.

In 2018, US REIT IPOs raised nearly USD 3.3 billion with secondary offerings raising nearly USD 15 billion in light of the strong US markets observed in the first half of 2018. The Retail, Residential and Diversified REITs represent the majority of the REITS in existence in the US market.

REITs in the UK gained good traction with 2017 being a record year for the number of REITs floated on the stock exchange. Brexit concerns in 2018 have, however, dampened investor confidence making it a tough year for REIT IPOs. As an example, one of the local REIT indices, the FTSE 350 REIT Index, closed 16% lower at the end of 2018 relative to 2017, reflecting this sentiment. There are currently a total of 52 REITs in the UK with a total market capitalisation of USD 76 billion.

Other markets around the world have also realized the benefits of these investment vehicles, signified by the Asia Pacific region being the second largest market for REIT IPOs. Developed markets such as Japan and Australia are largest by market capitalisation in the region, and other investor friendly regions such as Hong Kong and Singapore have also developed appropriate regulatory regimes to securitize real estate. Rapidly growing nations such as China and India have also moved to develop regulations encouraging REITs, making their future outlook exciting, to say the least.

Looking more regionally, of the total REIT IPOs seen across the world in the last five years, only about 9% of these have been in the Middle East region. In total, the first half of 2018 saw eight public REIT IPOs raising capital of approximately USD 893 million. Of these, the MEFIC REIT Fund IPO, based in the KSA and listed on the Tadawul, was the largest and ended up raising USD 237.5 million.

According to media reports, a number of new REIT IPOs are being planned up including: Manrre REIT by Dubai based Palmon Group which is expected to be listed by 2020; a mixed-use REIT by Dubai Investments subsidiary Al Mal Capital which is set to launch on the Dubai Financial Market; and more imminently, the Shari’ah compliant GII Islamic REIT by Gulf Islamic Investments which is aiming to launch this year and plans to pay out monthly dividends to its investors, unlike the majority of other REITs which tend to pay out dividends quarterly or bi-annually.

As noted above, regionally, firms are beginning to recognize the potential of REIT. The UAE, Saudi Arabia and Bahrain already have regulations in place with regards to REITs. Countries like Oman and Kuwait are also working on launching their own REIT regulations making it easier for companies to list on the local stock exchanges.

In particular, in Saudi Arabia the recent inclusion of Tadawul on the MSCI Emerging Markets index has helped to boost the market for REITs and attracted larger amounts of foreign investment. And while tax benefits might not be a relevant attraction for companies in the region, the liquidity benefit provided by REITs, all the while maintaining operational control of the assets, still remains a major attraction whilst being an opportunity for both investors and companies to generate attractive returns in the long run.

The region still has much room to grow in terms of the framework surrounding REITs and the number and size of REITs on offer. However, looking at emerging markets such as Singapore, which has established itself as the de-facto destination for Asian REITs, countries in the Middle East can emulate this model to establish themselves as leading players across the globe.

With the focus of regional governments to diversify away from oil revenue and attract foreign direct investment into the country, with UAE’s Vision 2021’s focus on the importance of infrastructure and Saudi Arabia’s Vision 2030, which intends to open the economy to the world for business and establish sustainable infrastructure, REITs may be just be the right investment product to leverage the changing economic dynamics.

It therefore makes it more important now than ever before for companies that are seeking to launch public REITs to ensure the right level of preparedness to maximize the value received from IPOs. For those who decide to go the way of public REITs, investors expect companies to be market ready with the appropriate corporate governance framework in place. This means an IPO readiness assessment, to ensure the equity growth story measures up, could be a good starting point to get things moving.