Navigating the changes to IFRS

This publication is designed to give Chief Financial Officers a high-level awareness of recent changes to International Financial Reporting Standards that will affect companies’ future financial reporting. It covers both new Standards and Interpretations that have been issued and amendments made to existing ones.

The December 2017 edition of the publication has been updated for changes to International Financial Reporting Standards that have been published between 1 December 2016 and 30 November 2017. In particular this edition covers the new Standard for insurance contracts – IFRS 17, for the first time.

The publication includes a table on page 2 which lists all the changes included, their effective dates and whether early application is permitted. However, the latter will also be dependent on local legislation. The table can be used to identify the changes that affect you. It has been colour coded to help entities planning for a specific financial reporting year end. 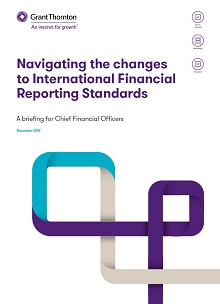