The world’s second largest economy by nominal gross domestic product continues to elevate its status as a global trendsetter in penetrating new markets and industries. With the substantial expansion of the Chinese financial services industry to international jurisdictions, the question stands; where does Islamic Finance fall in this path of growth? ​

“A new phase of co-operation”, was the headline which followed the arrival of President Xi Jinping to Abu Dhabi, commencing the inception of 'UAE-China Week'. The royal welcome by their highnesses Sheikh Mohammed bin Rashid Al Maktoum, Vice President and Ruler of Dubai and Sheikh Mohammed bin Zayed Al Nahyan, Crown Prince of Abu Dhabi and Deputy Supreme Commander of the Armed Forces set the grounds for the cooperative approach between the two economies. ​

With a variety of economical initiatives being put in place, the topic of Islamic Finance was bound to arise due to its potential significance to Chinese – UAE ties. Subsequently, Hamdan bin Mohammed Smart University (HBMSU) announced the third edition of its UAE – China conference on Islamic Banking and Finance, a progressive event intended to boost the industry growth. ​

The conference will explore new horizons to further enhance financial and economic integration; and to strengthen historical economic ties between the Silk Road markets, embodying the objectives of 'one belt, one way', with a focus on driving investment in Islamic sectors that offer promising opportunities for the UAE-China economic rapprochement. An opportunity to be seized in terms of involving more Chinese banking players within Islamic Finance transactions with respect to their trade ties with the UAE.

Islamic Finance is an area where the Chinese market can play a crucial role in terms of industry growth; until now one-off efforts have taken place at an institutional level to raise the awareness of Sharia compliant finance in the Chinese mainland, however, the potential for development is limitless. ​

While the Chinese muslim population is less than 1.6% of the total population, this still amounts to 21 million people which is a significant figure. Attempting to cater to this community, the Jianguo Road Branch of Xining Rural Commercial Bank was established in 2015 with a suite of basic-level Sharia compliant products, this is the first and only published effort pertaining to Islamic banking in the mainland.

In 2012, there were reports of plans of Bank Muamalat in Malaysia to establish the first Islamic bank in China, with no further developments except for a Sharia compliant  listed fund (AmIslamic Greater China). In terms of GCC based institutions, NBAD, ADIB and ENBD were involved in various Sukuk issuance, mainly through Hong Kong.​

​Meanwhile in the UAE, Arif Amiri, CEO of the Dubai International Financial Centre (DIFC) stated within an article published in July 2018 that, “China’s four largest banks in terms of total assets - Bank of China, Agricultural Bank of China (ABC), China Construction Bank Corporation and, Industrial and Commercial Bank of China - have successfully upgraded their banking licenses from being subsidiaries to becoming fully fledged branches in the DIFC. In 2017, ABC was designated a Yuan clearing bank in Dubai - one of the few destinations selected worldwide”. This brings forward an opportunity for Chinese banks to tap into the Sharia compliant wholesale banking market, whether on a bilateral level or as syndicated deals, as long as the regulatory requirements are met. ​

In conclusion, the potential for China and Islamic Finance is unlimited, where the UAE can add great value in terms of industry development in light of their ambitions to establish itself as the global hub for  Sharia compliant finance. China’s efforts towards a participative economical system with the UAE can go hand in hand with Islamic Finance being a participative trade-based financing tool. Overall, the UAE – Chinese relationship and Islamic Finance are on-track to witness further developments. Watch this space! 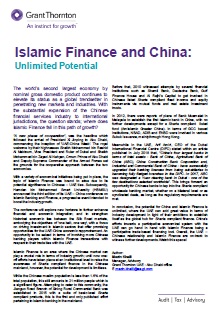