Developers, property companies, investors and homeowners suffered disproportionately during the financial crisis. But now, finally, expectations for profitability, jobs and orders are all on the rise.

House prices are climbing in key markets such as the UK and the US, contributing to the so-called 'wealth effect' which boosts the consumption patterns of homeowners. But the market is in no way uniform. 'Microclimates of opportunity' reveals investment is being channelled into cities and regions, rather than countries with even certain areas in economies that suffered badly in the recession, such as Spain and Ireland, becoming attractive again. 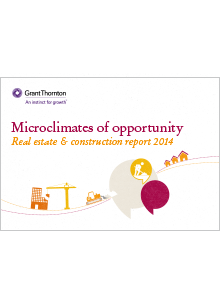