New research from Grant Thornton reveals a stark regional split in business leadership practices. While Asia Pacific and Latin American economies appear more open to the use of coaching, intuition and creativity, peers in Europe rely on more traditional practices. This split in leadership styles also closely mirrors a divergence in the proportion of women in senior positions.

Francesca Lagerberg, global leader at Grant Thornton, said: “We’ve identified two very different types of business leader in our research. In markets like Brazil, the Philippines, Thailand and Vietnam leaders we call the Modernists are evident – they are open to coaching, value creativity and intuition, and are much more likely to be women – or surrounded by women in senior positions.

By contrast leaders in European economies like France, Germany, Spain and the UK are so-called Traditionalists – they are far less likely to use a coach, place less value on creativity and intuition and are less likely to be women.”

Grant Thornton asked business leaders whether they use a coach, or have done so in the past, to develop their leadership skills. More than two in five businesses leaders in ASEAN (44%), Latin America (43%) and Asia Pacific (41%) have used a coach. This compares to just one in four (25%) business leaders in the EU. The North America result was level with the global average of 35%.

Business leaders were also asked how important they believe certain attributes are to good leadership. Globally, integrity, a positive attitude and communication came out on top but an interesting split emerges in leadership traits such as creativity and intuition which have increased in significance relatively recently. Nine in ten ASEAN leaders and 83% of those in Latin America believe creativity is important, compared with just 57% in the EU; while 85% of ASEAN leaders think intuition is important, compared to only 54% in the EU.

Francesca Lagerberg commented: “Business leaders in Asia and Latin America have been able to observe how management techniques in the West have evolved and matured. The research shows however that rather than simply copying and replacing management techniques, they are blending them with their own cultural and management practices to adapt a 'third way' for their local market.

"In my opinion, the fact that business leaders in these economies are more likely to be women is not a coincidence. They appear to show greater openness to coaching, place greater emphasis on more modern management techniques and are also more willing to delegate. We’re definitely seeing a difference of approach that highlights the value to business of having gender diversity in senior roles.” 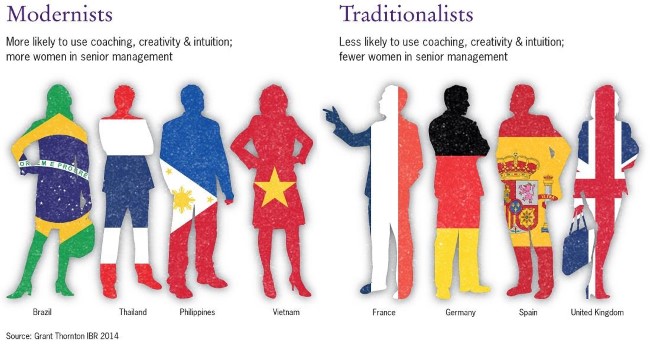 Grant Thornton revealed earlier this year that while leaders in these emerging economies display different behaviour, they are also more likely to be female. 32% of South East Asian senior business leaders are women, 29% in Asia Pacific and 28% in the BRICs. In comparison, only 21% of senior positions in the G7 are occupied by women, and 22% in the eurozone. At board level specifically, 26% of board members in BRIC economies are women, compared to just 16% in the G7 and 19% globally.

Francesca Lagerberg added: “There is a wealth of research suggesting that decision-making is affected by the gender balance on boards. As businesses with higher proportions of women in senior management tend to be found in emerging economies, the question is whether this offers them an advantage in the global race for growth.

"Economies in Europe and North America are picking up and business leaders are looking forward to the effect this will have on the growth of their own operations. But longer-term, the danger is that the diversity and openness to modern leadership styles exhibited by Modernist peers could result in better decision-making and, ultimately, stronger growth."

Click here to view a short video in which senior leaders from Grant Thornton discuss the results and offer insight into their own leadership styles.