Almost three months on from the launch of the European Central Bank's quantitative easing programme, new research from the Grant Thornton International Business Report (IBR) [ 741 kb ]reveals a jump in business optimism in the eurozone in the first quarter of 2015, with confidence moving back up towards pre-crisis levels. Many of the economies hardest hit by the financial crisis, such as Ireland and Spain, are increasingly optimistic about their growth prospects although the global picture is mixed, with Latin America falling to an all-time low. 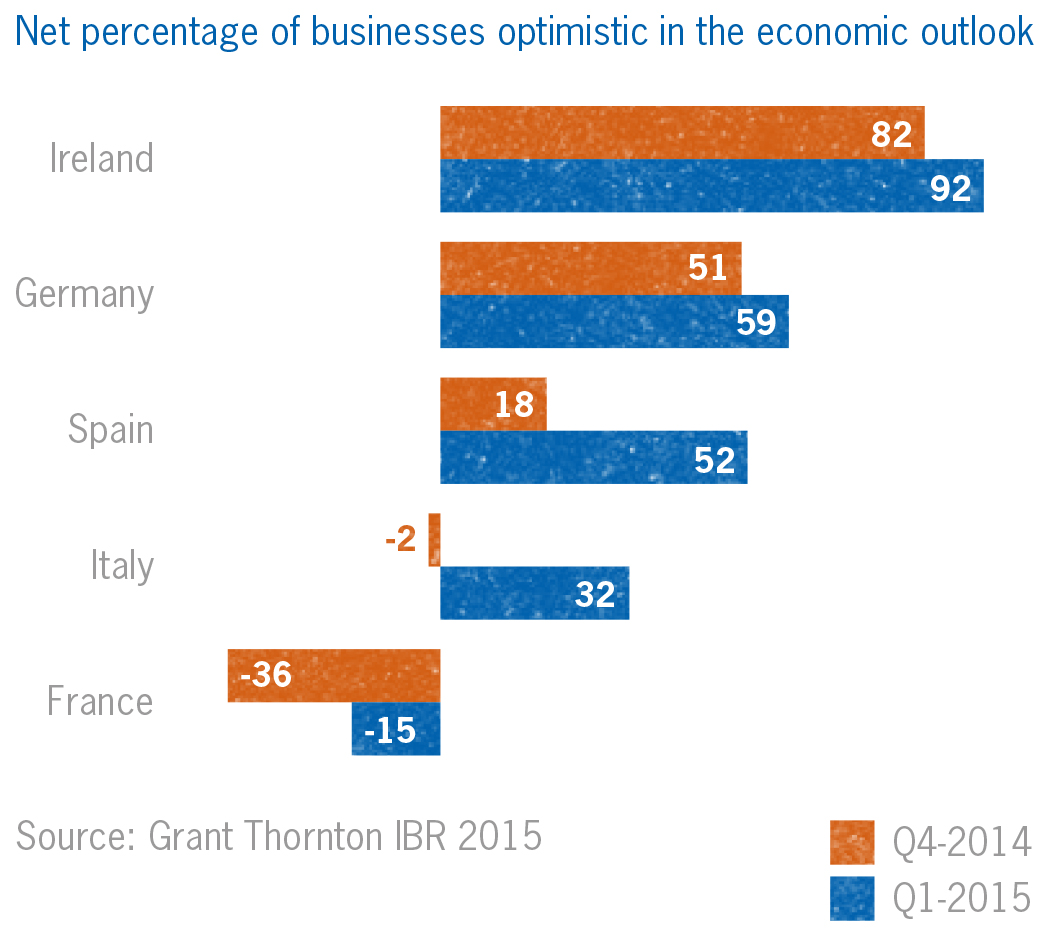 The IBR shows that net 34% of business leaders in the eurozone are optimistic in the economic outlook, up from just 13% in Q4-2014 and just 5% in Q3-2014. The resurgence has been driven largely by improvements in Spain (52%), Italy (32%) and Ireland (92%) - with the latter currently the most optimistic business community in the world. German businesses remain bullish (59%) with their French peers (-15%) still overwhelmingly pessimistic, although less so compared with the previous quarter.

Francesca Lagerberg, global leader for tax services at Grant Thornton, commented:
“We’ve seen a few false dawns in the eurozone following the sovereign debt crisis but when you consider how buoyant these figures are in the context of the uncertainty caused by the Greek elections, this could indicate a decisive turning point in the regional economy. Following the lead of the UK and the US, quantitative easing looks to have had the immediate effect that policymakers were hoping for, giving businesses the confidence and support they need to invest in the growth of their operations.

“Germany continues to drive the currency bloc, but it is heartening to see the amazing transformation in countries such as Ireland, Italy and Spain. Major austerity drives have caused severe discomfort for businesses and consumers but there is now a growing feeling of light at the end of the tunnel. With an improving real estate sector in Spain, higher exports and investment spending in Ireland and the anti-corruption drive in Italy, it is no surprise that businesses are increasingly optimistic about growth prospects.”

Expectations for increasing revenues and profits are high in each of these three economies. In Spain, 59% of businesses expect to increase revenues over the next 12 months, and 50% expect profits to go the same way. Ireland is even more buoyant with 70% positive on revenues and 66% on profits. Italian businesses are slightly less bullish but have posted double digit climbs in both indicators over the past three months.

Francesca Lagerberg added:
“European firms will take heart from this transformation and we expect businesses to invest more in people, research and development and facilities as uncertainty subsides. However there is one cloud on the horizon: the prospect of a Greek exit from the eurozone. The region is probably better insulated than it was three years ago but business leaders will be watching the situation very closely indeed.”

Globally, the increase in optimism in Europe is mitigated by sharp downturns in Latin America and Eastern Europe. Driven by Brazil (-18%), Latin America has fallen to an all-time low of 5%. Business confidence in Eastern Europe has dropped to just 6% with Russian businesses increasingly pessimistic (-6%).

Francesca Lagerberg concluded:
“Brazil is suffering from the major corruption scandal surrounding Petrobras which is threatening to topple the government, while economic sanctions are having a severe impact on the Russian economy. By contrast, China and India are moving strongly ahead. The BRICs are certainly no longer moving in lockstep.”

To learn more, explore the full quarterly results via our data visualisation tool or view the Q1 optimism infographic [ 741 kb ].